What’s going on in LA…eh?

Okay, here is a hockey joke you may not have heard…Does anybody know the difference between frequent flyer miles and the Los Angeles Kings? Answer: Frequent flyer miles earn points. But something ice cool has happened. If you are not a hockey fan you won’t appreciate this blog. If you are not a sports fan than this probably won’t keep your attention either. And if you are from Los Angeles and neither of the above, then go back to your macchiato and tweeting.

For years the city of Los Angeles has watched the Lakers, Dodgers, Angels, Ducks, Galaxy, and more recently the Clippers experience success in their sports. Hell, even the Raiders moved down here for awhile and flourished. But the LA Kings hockey team has not enjoyed the same success at least not until now. And it couldn’t have come at a better time. Once again the underachieving Kings barely made the playoffs while nobody noticed except for the few real hockey fans that live in the LA area. Most local sports fans are used to the Lakers, Dodgers, and Angels keeping them preoccupied this time of year, but with the exception of the upstart Dodgers, there hasn’t been much to cheer about the last month or so in sunny So Cal. That was until the Kings decided to show up for the playoffs. Now the Kings are on the brink (and let’s hope I don’t jinx it) of having a chance to hoist Lord Stanley’s Cup.

The average sports fan knows what the Stanley Cup is but if you ask someone from LA what ‘home ice’ is they will either tell you it's ice from their freezer or a weird way of pronouncing hummus. A ‘two line pass’ to a typical LA person might mean some guy is actually using two pickup lines to meet a chick. And if somebody asks someone else “when do they drop the puck tonight”; don’t worry he is speaking English. 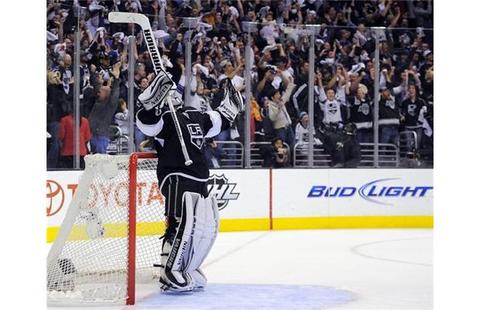 I lived in the Los Angeles area for over 5 years and one thing I noticed was LA sports fans are a different breed. There are hardcore fans and then there are the people that show up.  A typical conversation overheard at a LA Kings hockey game might be, “did you see that glove save?” “No, but I did run into Michael Keaton in the bathroom and he’s shorter than I thought in person.”

When asked about the recent success the Kings are having an angry Josh Sauer of Whittier replied, “I used to set my clocks ahead in the spring for daylight savings time cause it usually coincided with the Kings being mathematically eliminated from playoff contention.” “It wasn’t until I was late for work three times last month before I realized they were still playing hockey.” Many people in LA would probably be surprised to hear LA has a hockey team. And the typical fan might not even be able to tell you the last time a Kings team played a game in Los Angeles in late May. That would be when the Lakers were playing Sacramento in the NBA Conference Finals back in 2002. Seriously though, some might remember the Wayne Gretzky led and Barry ‘the mullet’ Melrose coached Kings made it to the 1993 Stanley Cup final only to be embarrassed by the Montreal Canadiens. 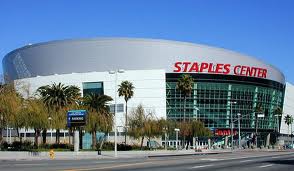 Home of the Lakers, Clippers, Sparx and Disney on Ice

For some reason, this time feels different though. If it were up to the Kings they would elect to play all their finals games on the road as they set an NHL record in this year’s playoffs for the most consecutive road wins at 8 straight. They await the survivor of the New Jersey Devils and the New York Rangers. And the Kings,ironically enough, will be the road team for the fourth straight series. And some might say, they don’t have ‘home ice’.

So people of LA, if you think there’s nothing to go see at the Staples Center now that the Lakers and Clippers seasons have ended you can always go catch one of those Justin Beiber or Lady Ga Ga concerts. Oh wait; they’ve been postponed because the Kings are going to be using the place a little longer.

You're going to be celebrating big time!

Or not. I think the Devils will get'um though.

They're gonna get the piss beat outta them in the finals. Rangers in 5

It'll be a great series!