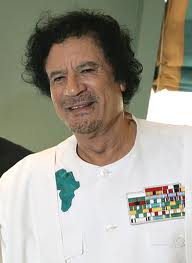 I feel kinda bad for Muammar Gaddafi . Muammar obviously had some deep psycological problems but who's to say they couldn't have been worked out with a little therapy.  I know that he liked to project the meglomaniacal evil murdering dictator image, he had to!, I mean, look at the people he ruled...some of them needed a good beatin to stop some of the whacky shit they were doing, but, he was somebodys father! and that wasn't the real "Gaddaffer" that I knew, a fun loving prankster.

If Muammar had been given a little time and patience, he could have become a productive member of society. Capitalizing on name recognition alone, MoMo was extermely marketable. He could have done many things.

There are many deposed leaders, Kings, Emperors, etc. that were never given the opportunity to "Straighten up and fly right". I am sure that prior to their beheading, firing squad, public stoning all of them would have preferred to be newspaper boy's forever

If some of the infamous bad guys in history were spared, and rehabilitated and reinvented themselves