(the great and powerful wizard of odd)

In 2011 donald trump, while limply considering a run for president, floated two very bad ideas at a speech in Las Vegas. His first horrible idea consisted of more or less renting out our military and servicemen.  His second worst idea that night was taking the oil from Iraq, as some sort of bizarre conquest prize. Just let that marinate for a while ...  commander and chief of the armed forces.  Back then, I heard him say these things on C-SPAN, and I had to pick up my jaw so I could laugh my ass off.

As of Dec 11 2015, 35% of those polled SCIENTIFICALLY, not just some fox news statistical comedy poll where their watchers are directed to go online, want trump as the Republican candidate for president. A real poll. They want this guy as their candidate. Really. It's a real thing.  I shit you not.  I'm still waiting for the punchline.

Now, donald trump, the orange  businesstroll, wants to be your president.  He also wants to:

1. Stop any Muslims from immigrating (thereby violating part of the US Constitution he would have to swear to uphold in order to take office).

2. Build a giant fantasy border wall with Mexico (for an alternate reality where tunnels don't exist, I suppose.  it worked great for Israel and Palestine, right?)

3. Deport every illegal immigrant immediately (which would consume every seat on every US airline for 4 months, if done with impossibly perfect efficiency).

5. Display very clearly to the world how intolerant successful Americans are willing to become when they are under pressure to grab the big shiny brass ring.

But ... this is all just his new material, he's been producing insanely simpleminded hateful pandering gibberish, as well as just plain bad ideas for years.

(F bombs are sprinkled in there like Easter eggs.  Can you find them all?)

trump on John McCain:
“He’s not a war hero. He’s a war hero because he was captured. I like people who weren’t captured.”
-New York Times, Jonathan Martin and Alan Rappeport, July 18, 2015

(I heard he was living it up in some fancy hotel in Hanoi, a Hilton even!)

(oppose the will of the great and powerful wizard of odd, and he will send a lesbian seduction force to steal your girlfriend.  And your little dog too.)

Champion of the Obama's birth certificate campaign in 2011, trump talking to Wolf Blitzer:
" "Here’s the question," Blitzer interrupted. "Did the conspiracy start in 1961 where the Honolulu Star-Bulletin and the Honolulu advertiser contemporaneously published announcements that he was born in Hawaii?"
"That's right. And many people put those announcements in because they wanted to get the benefits of being so-called born in this country. Many people did it. It was something that was done by many people even though they weren’t born in the country. You know and so do I" "
-The Huffington Post, Rebecca Shapiro, Posted: 05/29/2012

(they're all out to not get Obama, even the time traveling biased media!)

(Every single one? A relationship.  Wow, that guy is busy, just wow.  Too bad, he could have really saved some time by just befriending a few token "blacks".  I hear that works too.)

(I don't see how this one is offensive at all, he must've been having an off day)

Sooo, all in all, pretty presidential, doncha think?

Comment by Rosedude on December 17, 2015 at 1:29pm
Nice compellation of Trump's greatest hits, Mello P. His candidacy is both hilarious and depressing.

Trump is the candidate I'd most like to sit down and quaff a few beers with. Over pizza. With extra cheese and double anchovies. Because then I could vomit up the whole disgusting mess all over his obnoxiously self-important face, expensive suit and ridiculous hair.

He reminds me of this: 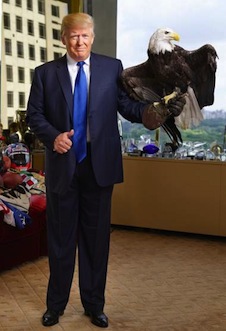