Those Were Different Times #360

Those Were Different Times #360

Its his fifth book, He started with "How to Date Supermodels"
5. Spurned over his facial psoriasis condition, Larry picked up what he thought said "How to pick up Rashy women"
-Iverneil

4. The Silence of the Gams
-Rotwang

3.  Trying to pretend you're Zorro won't do it.
-RoadKillHairPiece

Like a six-pack – with your thumb and middle finger...
2.  Just refuse to refuse refuse.
-MacSpruce

1. You might want to look inside before you buy this book, it's just the word cocaine in large bold print on the first page and then the rest are blank.
-JJJ23 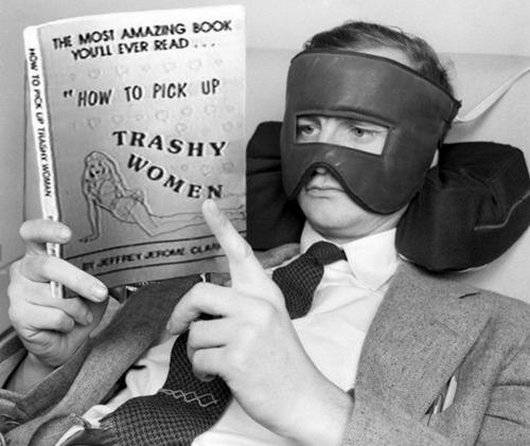 Hang around by the curb on Wednesday mornings.

Grab them by their love handles.

Make sure to mask your intentions.

Buy them things and make it clear that if they don't have sex with you, you'll stop buying them things.

Addendum, if they're prostitutes just buy them, but don't pay till after. Second addendum, just date prostitutes.

Buy her flowers.  Dandelions are a good choice.

The Silence of the Gams

Its his fifth book, He started with "How to Date Supermodels"