Those Were Different Times #107

Those Were Different Times #107

Introducing: "Satan Is Real" by THE LOUVIN BROTHERS.

7. Prepare to watch the Louvin Brothers make an ash of themselves again.
-Buttermilk

6. Yes, Virginia, there is a Satan, and he's hiding under your bed. Now go to sleep.
-MacSpruce

5. Satan is real............and apparently his parents neglected to get him braces when he was a child.
-MadAdam

4. If you play the record backwards it's Jim Jone's entire goodbye speech.  If you play it forwards without laughing there's a 90 percent chance you think Obama is a foreigner
-Ian Renga

3. Coming this February to the Dark Room at the Rt. 666 Motel, it's...
The Louvin Brothers with special guests one-half of Milli Vanilli and Elvis Presley's towel.
-Gerhardguffaw

2. new technology has allowed us to see the inside of a Hot Pocket® before wrap penetration
-antistar

1. "... and to properly battle him, The Lord insists we dress like Colonel Sanders' gay nephews!"
-theDIRTYmidget 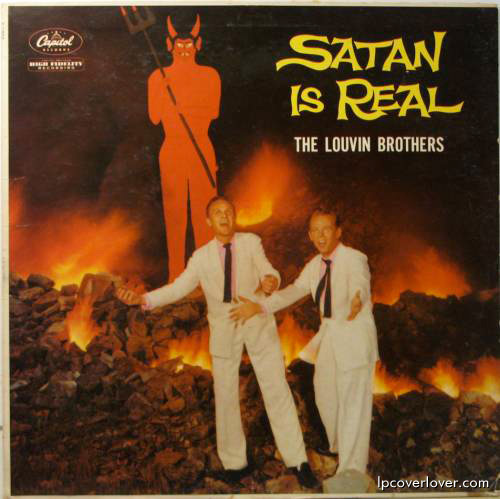 ... and he wears grandma pants
-me

Comment by drwho on January 4, 2011 at 7:38am
Anthony Hopkins and Frank Gorshin:  The Early Years.

Comment by theDIRTYmidget.© on January 4, 2011 at 3:23am
Mental-illness is an illusion.

Comment by theDIRTYmidget.© on January 4, 2011 at 3:22am
... and he appears to have been designed by the creators of South Park.

... and he apparently starred in "Yellow Submarine".