the strange case of the small pest attacks of the 1950's

i was looking up that one zappa album "weasels ripped my flesh" and i came across these.  odd men's magazine covers, where men battle hoards of varmints, animals that usually fall prey to bb guns and take out boxes. 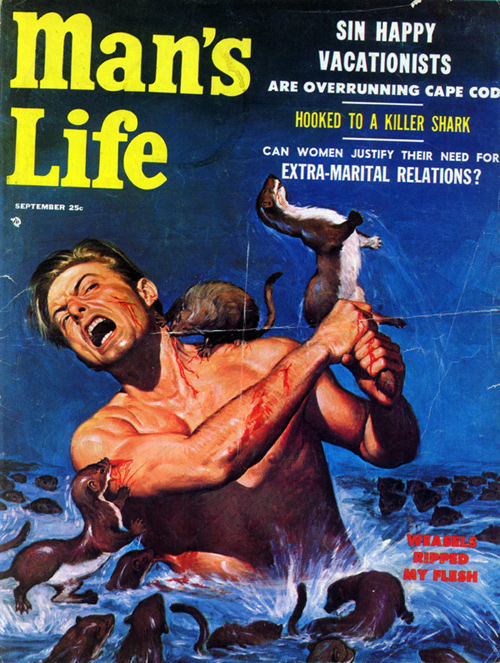 really? ferrets posing a mortal danger? too bad he didn't have A FRICKIN BROOM!  cause that's usually just the thing to subdue an ill tempered weasel, a broom.  and this gang of weasels?  what, was there a convention in town? maybe he was wearing a cheap mink coat, and it came to life. again with the rat pack attack.   if you can't fend off 4 squirrels, you have no business being south of 100th avenue.  man, this guy has no luck:  1. he can't seem to keep from losing his shirt, and  2. he must have bird seed implanted just beneath his skin.  3. aren't rabid animals agoraphobic?  you'd think he'd be safe in the river, but you'd be wrong. i have no idea where to begin.  first, they're red, so they've somehow survived being boiled.  second, that man must be very patient, to let them crawl up him until they are ready to attack.  must be one of those "turn the other cheek" deals.  third, cannibal crabs sure do look a lot like lobsters, don't they?  fourth, wouldn't cannibal crabs be more interested in eating each other? yeah, again, attack of the cooked crabs, except this time they seem to be doing more work on her clothes.  they must be fashion crabs, and it seems her outfit is "so last season".   "click click click", they say, which in crab talk means: "did liberace dress you, then put a gun to your head, and make you leave the house looking like this?".  "click click click click" they continue, which means "your matchy matchy purple on purple aesthetic offends our crab god".

finally, the crabs haven't been cooked, and it actually looks like the woman is HELPING the man?  this must've been some sort of an error.   an illustrator was definitely fired over this:  she was supposed to be struggling helplessly against the might of two crabs, not heroically strongarming them with a bruce lee esque fighting stance.  honestly it looks like she brought butter sauce, and her man is freaking out and forgetting how bullets work. TURTLE ATTACK!  wait a really really really long time, then fight back.  lull them into a false sense of security! must be that small variety of giant turtles called normal sized turtles.  i guess it can be frightening, when you're that far away from a bathroom and a turtle head pokes out.

No! not lampreys! they'll hickey you to death!  i bet they were having a beach volleyball game, and tried to return that one serve that flew south ... and before they knew it, bang, lamprey fight. that man is being attacked by red headed anacondas.  I can't imagine this to be any kind of a veiled metaphor. especially with that white goo dripping off the snakes heads. nope, this is just a wholesome dose of good old fashioned fear of being attacked by penises. 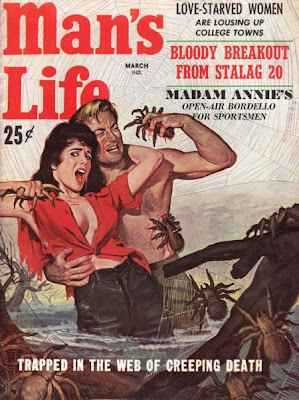 why are they always up to their waists in water?  Man, unbuttoned red shirts were really popular back then.  hey honey, don't forget to pack your flimsy red shirt, it would spoil our vacation, you know the one to creeping death cave ... the one i've been talking about.  well, the reservations are already made, so you have my permission to leave the kitchen, and put on your shoes. Very funny!  Once I read "...cooked crabs" I remembered that scene from Ghostbusters:  "And the seas boiled and the skies fell."