You may find this hard to believe, but I was cute as a child. I was very cute, actually. I was so cute that had I been a pedophile, and not myself, I would have fucked me. I was so cute that if I were a pedophile now, I would build a time machine to travel back in time and fuck the child version of myself. I would risk causing that big of a rift in the Time-Space Continuum, and my little boy butthole -- that's how cute I was. Luckily for me, I won't be giving a new meaning to the name Doc Brown, for two main reasons: A) Happily, I'm not a pedophile, and B) Sadly, I do not own a Delorean. God, they are awesome.

Being that young, I wasn't able to fully take advantage of my gift, besides weaseling some candy here or there, or just getting people to be nice to me in general. I didn't necessarily realize it then, but looking back on it, it also allowed me to basically get away with anything I wanted, because everyone loved me; including the costume designers for Miami Vice: 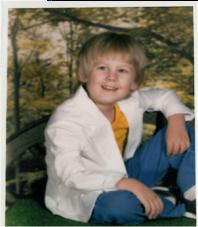 One day, my life will be filled with money, cars, women, and cocaine

See? I told you. Fucking adorable.

As Notorious B.I.G. once famously said, my "...reign at the top was short like leprechauns..." Sadly, my cuteness left as quickly as it had arrived. Around age 10 or so, my looks started to dramatically change. That December, while walking through the local mall, I was told that I should ask for a new face for Christmas. To this day I don't understand why the department store Santa would say such a hurtful thing to a child, let alone one who wasn't even sitting on his lap. To add insult to injury, I took his advice and actually did ask for a new face. Do you know what I got? A Teenage Mutant Ninja Turtles costume set, complete with plastic weapons. Awesome, right? Every ten-year-old's dream? No. Do you know why? Because, it also came with a mask. A mask, to hide my ugly, worse-than-a-teenage-turtle-who-also-happens-to-be-a-mutant's face. Fuck.

During the next thirteen or so years, peoples' comments on my looks consisted mostly of saying I resembled two people: Detlef Schrempf -- a German-born NBA forward, known for his years playing for the now defunct Seattle SuperSonics; and Dirk Nowitzki -- a German-born NBA forward who currently plays for the Dallas Mavericks. So, basically, I look very German, which sort of explains my affinity toward pants with flared thighs (which are hard to find now-a-days) and small mustaches. To round out my top three NBA look-alike draft picks, a few people also said that I looked like Scottie Pippen -- an American-born NBA forward, known for being Michael Jordan's bitch. It's the nose, I'm guessing.

For the most part, I eventually grew out of looking like The Dream B-Team, but the resemblance is still kind of there, depending on the lighting and how much you've had to drink. However, my one saving grace was my eyes. I have always been told that they are "pretty," which I think is an honest compliment and not a veiled insult attacking my masculinity. I can't get too excited about them, though, because I have the vision of a wombat with glaucoma. I have to wear glasses all the time, and said glasses tend mask their "prettiness." So, the one good thing about me is always hidden. Thanks, God. You're a dick.

The following picture is so that you can judge for yourselves. As indicated by my extremely dilated pupils, it was taken an hour or so after eating a sizeable about of mushrooms. Or, depending on your current status as a law-enforcement agent, an hour or so after an eye exam.

Over time, I learned to accept my shortcomings. No, I was not going to be the first equally successful and talented white rapper (damn you Eminem). No, I wasn't going to play in the NBA like Poppa Pippin. No, I wouldn't take the professional greeting card industry by storm as the newest and hottest talent. And, sadly, I would never grace the cover of a romance novel, with a face so elegant that birds mistook it for open air and flew right into it. I would never feel that triumphant stinging of a beak piercing the skin of my nose while I tried to recreate that rollercoaster scene from Fear with whatever random woman happened to be sitting beside me.

I had fully come to peace with the idea of living a completely boring, dreamless, verging-on-pointless existence, just like all of you. That is, until something very strange happened to me one fateful night...

Comment by Jesus on March 25, 2011 at 2:43am
Your body is a lovely temple, perfect in God's eyes--but with many masters.  I feel I must disclose that you have worms.  Sorry.

I'll fuck them pupils into the fourth dimension while listening to the 5th dimension...Daaamn!!!

Comment by chuckkling on March 24, 2011 at 1:19am
I had an Indian guy (not native American but the computer kind) ask me for my autograph because he thought I was Larry the Cable Guy. So your German basketball references struck a chord with me. Can't wait for the....to be continued.....