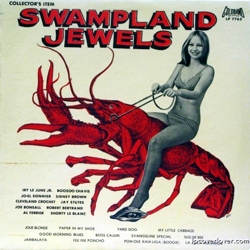 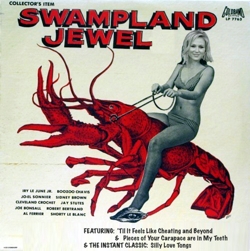 It you try to talk to Swampland Jewel, she tells you to shuck off.

Swampland Jewel once flattened a building by staring at it hard.

That little oyster is preparing to give her a pearl necklace.
chuckkling

I hear she has pearl necklaces by the chestful
(I swear I thought of that before Chuck beat me to it!)
MacSpruce

Indigenous Caption #1
Being from Wisconsin, Helen had no idea she was riding the crawfish backwards...

Indigenous Caption #2
Being from Wisconsin, Helen kept pronouncing the name Crochet..."croch it"

Indigenous Caption #3
Being from Wisconsin, Helen learned the hard way that "sucking the head" was actually something you did to the crawfish...

Indigenous Caption #4
Being from Wisconsin, Helen couldn't understand why everyone kept laughing when she would refer to the red thing as a Lobster...
Jams3kds

The 11 Flawless Pearls Of The Bayou.®:

Is That Fish I Smell or Are You Just Happy To Pee On Me?

10. lobster? I thought she had crabs!
jellybean13

9. There are actually two swamp lobsters in this picture.
Donairs

8. The ladies will do anything for cheddar biscuits... anything.
missalicia

7.5. She has some exoskeletons in her closet.
7. This is what "Avatar" looks like without the 3-D glasses.
chuckkling

6. I'm sure I could rise to the Cajun.
MacSpruce

5. Tiny woman? Giant lobster? Does he like it when she rides him? None of these questions and more will be answered over the course of these 12 instrumental Delta blues and jazz tunes about hunting for jewels in swamps.
JJJ23

4.5. Her pussy tastes like Tony Chacheres®
4. Later at the Doctors Office....
"Well Ma'am, it appears the large pustules on your thighs are nothing but Crawfish Boils!"
Michaelred73

3.75. How can you tell the difference between a clam and an oyster?
An oyster has her big toe shoved up his rear valve.
3.5. Who's your crawdaddy?
3. Pinch me, peel me, suck me, eat me. This was not the crawfish talking.
Bubba Licious

2. Now you know why her chicky box smells like fish.

1.75. My Little Cabbage (The Twat Song)
1.5. Put your foot in my clam!
1. "Swampland Jewels" is the way that Rednecks refer to their balls!
Shag

J A M B A L A Y A
to ALL dem Winnahs !!!!!
May you never have oversized crustaceans between your legs.
xo♥.

Comment by MissA on February 26, 2011 at 7:42am
The ladies will do anything for cheddar biscuits... anything.

Comment by mellowpuma on February 24, 2011 at 6:31am
Swampland Jewel gonna mess the Little Mermaid up good! ya'll.

Comment by Donairs on February 23, 2011 at 10:00am
There are actually two swamp lobsters in this picture.

I hear she has pearl necklaces by the chestful

(I swear I thought of that before Chuck beat me to it!)

Comment by chuckkling on February 22, 2011 at 8:57pm
That little oyster is preparing to give her a pearl necklace.

Comment by MacSpruce on February 22, 2011 at 8:54pm
Well, that explains all the crustacean patches on her bedsheets.

Comment by MacSpruce on February 22, 2011 at 8:45pm
They call her "Easy Anna from Louisiana" because she'll ride anything.