Bare-Assed Results, Revealed (Get It?).: 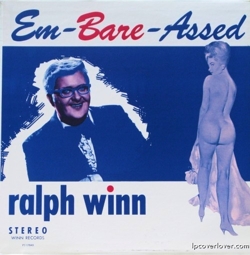 6. The number one album in Assghanistan!
Shag

3. Ironically, Ralph was wearing his Double - Breast - ed suit when he got Bust - ed for sexual Ass - ault.


6. It's enough to make you Ralph.
MacSpruce

5. I didn't know that Ed McMahon had a singing career!
Shag

3. Every shapely woman's dream is to be leared at by a fat Buddy Holly.
mellowpuma

2. Liberachi kept up quite the facade for about ten minutes with his alter ego "ralph winn".
mellowpuma

1. His cousin, Russ Meyer could never understand him.
drwho

- - -
TWDTFUM.®
(Those Were Different Times
For Unrepentant Masturbators.®).:

3. So this is what they had before video vixens...
jellybean13

Why is Ralph back to back with a Yeti?
chuckkling

7. I would give the win to whoever came up with the title to this album.
chuckkling

6. Does this mean this is stripper music?
jellybean13

5. WTF...I bought the "mono" version and only got one cheek.
Gerhardguffaw

3. Unfortunately, the pinnacle of Ralph's creativity and talent was achieved with the title he thought up for his album. The music itself, and everything else in his entire career, came a distant second.
MacSpruce

2.1. Ralph is a filthy, cheeky bastard.
2. "I didn't know what to expect but a microphone hidden in the lady's toilet at a Denny's Restaurant took even me by surprise."
jessicaligula

1.7. Why should he be Em-Bare-Assed? He's the one who is pimping his mother out!
1.6. Includes the hit single, "I'm gonna turn your Brown Eye Blue"!
1.5. Be honest! Do these ass cheeks make me look fat?
1.4. Oh, she's got buns on her head! That means I can poke her in the eyes while I fuck her ear lobes!
1.3. It's a good thing that he's wearing that tie! It's helping to hold his foreskin down!
1.2. Back in the day, she was considered a hottie! But, he was still considered an ugly Sumbitch!
1. HEEEEERREEE's Vaginie!
Shag

That was quite a bitchin’ batch, Shaggy. It had my arrested development howlin’ from the get go.

(Hey, am I the only one who noticed that Ralph Winn looks kind of like Eric Wareheim of 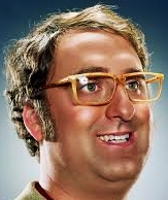 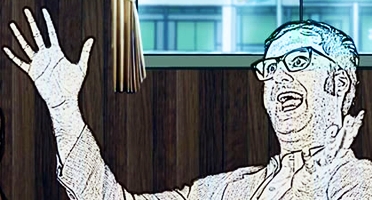 Comment by chuckkling on January 28, 2011 at 11:22pm
I would give the win to whoever came up with the title to this album.

Comment by Shag on January 28, 2011 at 10:08pm
Back in the day, she was considered a hottie! But, he was still considered an ugly Sumbitch!