Chicago Bears quarterback Jay Cutler and girlfriend Kristen Cavallari were spotted shopping for plastic surgeons in Los Angeles this week, upon the advice of team physicians.  When asked how he felt about the fans and media questioning his manhood in the wake of the NFC Championship Game, Cutler was quick to defend himself.

Hey look, I'm not the first athlete to grow a pussy with a championship hanging in the balance -- OK?  Ever hear of Roberto Duran?... Scottie Pippen?... LeBron James?  It happens.  Just to be mentioned in the same breath with guys of that caliber is an honor in itself.  I just hope that the doctors know what they're doing and can sew this thing up or remove it altogether... whatever, it's starting to itch really bad and I can't stop picking at it.  I heard it pop at the beginning of the third quarter and immediately knew my day was over. 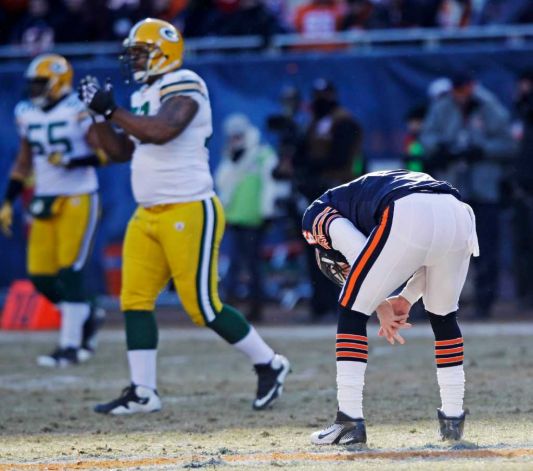 According to Bears head trainer Tim Bream, coaches were baffled and repulsed when they first saw Cutler's injury.

They thought it was just a nasty gash that could be patched up, but I know a freshly sprouted flower when I see one.  I couldn't in all good conscience let Jay continue playing in that ball game.  It wouldn't have  been fair to him, or the team for that matter.  I mean, have you seen the size of those monsters out there?  That's some scary shit!  Plus I think the league has some sort of rule about that.  No?  Well they should.

Sources close to the Bears report that team officials immediately began setting appointments for the much maligned signal caller to meet with specialists in California.  Cutler confirmed that information before ending his impromptu interview.

Yeah, they sent me to see the doctor who did Chaz Bono's plumbing but he gave me the creeps... no way I'm letting that dude touch my vagina.  And who is this Dr. Murray guy they want me to see?  That name sounds familiar for some reason.

So, you're telling me Jay has a vajay-jay?

Comment by Shag on January 28, 2011 at 10:22am
That explains why the snow was thicker on parts of the field than it was on others. The snow was sticking to the snail tracks left by Cutler's Vagina!

Comment by mellowpuma on January 28, 2011 at 1:00am
I'm a Packers fan, and here's the situation: if Cutler had gotten injured sooner, the bears might be in the superbowl.  If you're saying he's a wuss because the Packers took him out of the big game, that's their job, they did their job.  Blame the offensive line that was supposed to protect him but failed to do so several times.  Sports are always a bit of a toss up.  Shit happens. Rodgers was taken out of a game earlier in the season.  The silver lining, is that the bears learned that their 3rd string quarterback should be their 1 1/2th string quarterback.

Comment by LL Bein on January 27, 2011 at 7:26pm
Aaron Rodgers just has more balls than Cutler & we'll all get to see them just as soon as he Wins the Super Bowl, becomes the next Lambeau Legend, has a HOF career, sells everything from cologne to autos, becomes a Jeans model, refuses to retire, sign with the rival Vikings, and texts messages them to everyone.

"And who is this Dr. Murray guy they want me to see?"