Another Charlie Sheen speaks out... 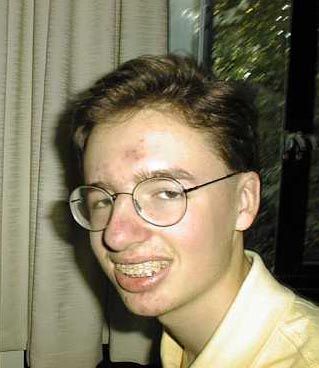 Charlie Sheen got all kinds of notoriety last week when his name was everywhere.  To Charlie Sheen (pictured above) from Topeka, Kansas, it was a nightmare.

Charlie, (a.k.a. Zitler, Charles Not In Charge, The Virginator and Door #3) is a 15 year old sophomore at St. Peter The Large High School, where he is on the Debatable team; a towel boy for the boy's swim club; a 'wallflower' at school dances and a substitute captain on the Safety Patrol.

Now, Charlie is known around school as the hard partying, womanizing hunk with one speed....GO!!!!!

Asked about his new found popularity, Charlie was quoted (after he wiped a few tears away) as saying, "I'm not THAT guy!  I have one speed....tortoise!  And I'm certainly not winning...especially with the women!  They don't even know I'm sucking oxygen.  The only time they know I'm alive is when they yell at me to get out of the way!"

A new week is starting, and Charlie hopes the hoopla goes away.  "I just want to be left alone with my thought, my Etch-A-Sketch and a collection of photos from my 5th birthday bash at Monsignor Bob's apartment."